What I Learned in Professional School 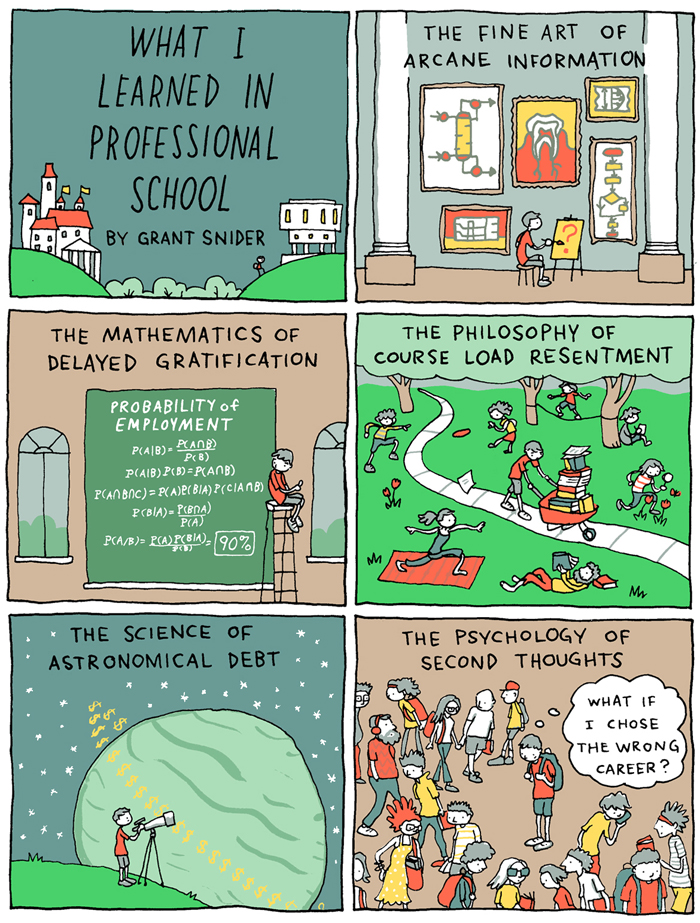 This comic appears in the August 3 NY Times Education Life - thanks to editor Jane Karr!

This year I graduated for the final time, having spent my entire adult life in professional school. I spent three years in Chemical Engineering, the only knowledge of which remains are vague process diagrams and the difference between turbulent and laminar flow. I then went to four years of dental school and two and a half years of post-dental-school residency, where I picked up even more arcane information, as well as a sizable amount of student loan debt.

I enjoyed both fields of study, though it didn't make for the most relaxing undergraduate experience. Early on in my engineering studies, I found cartooning. It was the perfect creative outlet - visual and verbal instead of mathematical, humorous instead of dry. I often enjoyed my humanities electives more than my chemistry and math courses, though I never considered changing my major. These art and literature courses were a glimpse into another way of approaching the world - through creative exploration rather than scientific analysis.

As I completed my training in dentistry and moved on to specialize in orthodontics, my interest in cartooning and illustration continued to grow. The hours of sitting in dark lecture halls parsing the details of, say, the fifth cranial nerve, had a curious effect on my aspirations. I thought it might be possible to pursue my love of cartooning and illustration while simultaneously using my formal education in my chosen career. For me, the two are inseparable - what I went to school to study and what I learned on my own.